A father gives his young daughter a yo-yo and waves goodbye as he shuts the door. Later, home alone, the girl swings her toy while her father leaves an alarming answering machine message. His voice attempts reassurance. Set during the attacks of 9/11, Eusong Lee’s visually arresting short animation is a stark examination of the unstoppable nature of time.

Set during the attacks of 9/11, a young girl wishes she could go back in time. 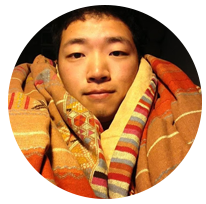 Eusong Lee was born and raised in Ulsan, a city in the southeast region of South Korea. At the age of 14, he moved and attended school in Canada, where he began painting lessons with an animator in Toronto. His interest led him to CalArts’ School of Film/Video’s Character Animation Program. After completion of his first film Plug, he produced SHAPE. After completing his third year at CalArts, Eusong won a Student Academy Award for Will. He is currently taking time off from school to work at JibJab, a digital entertainment studio for production design and directing.

Film School Shorts is a national half-hour weekly series that showcases short student films from across the country. Grouped together around a central theme or topic, and featuring production values that rival their indie film counterparts, KQED is proud to present award winning entertainment to a national audience.

KQED Public Television 9 is one of the nation's most-watched public television stations during primetime. KQED produces and acquires programs that inspire, inform, and entertain the people of Northern California. KQED broadcasts the best available programs from PBS, APT, and other distributors, and also produces its own unique national and local programs, series, and specials. Airing more independent films than any other public broadcasting station in the country, KQED is committed to bringing the work of local and independent film producers to the community. KQED video content is now widely available for streaming and downloads on this site and on iTunes.

Film School Shorts is made possible by a grant from Maurice Kanbar, celebrating the vitality and power of the moving image, and by the members of KQED.