Fourteen-year-old Mo is the only girl on an all-boy wrestling team. Her divided world is a challenge even off the mat, as her single father, a working class ex-wrestler, takes a cautionary stance to his daughter’s involvement in the sport. But even amidst the headlocks and grip holds, there are things that even Mo couldn’t predict and emotions still left to wrestle.

A teenage female wrestler on an all-boy wrestling team faces her biggest challenge. 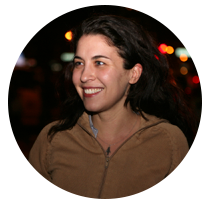 Her film First Match won Best Student Short at the 2012 Aspen Shortsfest and Best Short Film at the 2012 NJ International Film Festival. Olivia is a 2012 Film Society of Lincoln Center/IFP Emerging Visions Fellow for the development of her first feature film. She received her MFA in Film from Columbia University and was awarded faculty honors for her original screenplay 216 Garden Street.

Film School Shorts is a national half-hour weekly series that showcases short student films from across the country. Grouped together around a central theme or topic, and featuring production values that rival their indie film counterparts, KQED is proud to present award winning entertainment to a national audience.

KQED Public Television 9 is one of the nation's most-watched public television stations during primetime. KQED produces and acquires programs that inspire, inform, and entertain the people of Northern California. KQED broadcasts the best available programs from PBS, APT, and other distributors, and also produces its own unique national and local programs, series, and specials. Airing more independent films than any other public broadcasting station in the country, KQED is committed to bringing the work of local and independent film producers to the community. KQED video content is now widely available for streaming and downloads on this site and on iTunes.

Film School Shorts is made possible by a grant from Maurice Kanbar, celebrating the vitality and power of the moving image, and by the members of KQED.