John Wesley Huddleston tries to support his wife and five daughters by digging for gold and precious minerals, but the ground has consistently turned up dry. When faced with the news that his family's farm is facing imminent foreclosure, John is forced to decide between getting a respectable job, or continuing his passionate prospecting with unlikely hopes of striking it rich.

John Wesley Huddleston tries to support his wife and five daughters by digging for gold. 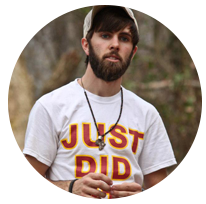 Travis Mosler graduated from the University of Central Arkansas's Digital Filmmaking program in 2013. In the summer of 2012, he was a part of the Directing Intensive program at the University of Southern California's School of Cinematic Arts. The short film he wrote, shot, directed, and edited, Out Alive, earned a place in the top five films of the program. While he's searching for inspiration and ideas for his next independent film, he is the Video Content Director at Agency 501 in Little Rock. Passionate about telling stories with spiritual significance, Travis ultimately wants to glorify God through his talents and allow people to experience entertaining films that are aimed at the spirit, not just the heart.

AETN first took to the airwaves in 1966 as (KETS) in Little Rock, Arkansas. In the early years, KETS was associated with National Educational Television, a forerunner of the current Public Broadcasting Service and focused primarily on instructional programming for use in Arkansas classrooms. After ten years of operation, KETS became AETN, the Arkansas Educational Television Network with the addition of three transmitters in Fayetteville, Jonesboro, and Arkadelphia. The addition of a fourth transmitter in 1980 in Mountain View completed AETN’s coverage of the state and with the help of a ten-site microwave interconnection system allowed AETN to deliver national and local programming to homes throughout the state.

Throughout the years AETN has consistently received national recognition for its Original Programming. This recognition reflects a history of broadcasting excellence that AETN has maintained throughout its forty year history and exemplified by the network’s many Emmy awards including three 2010 Emmys for the Arkansas Department of Heritage supported “Silent Storytellers” a documentary focusing on the art, history and preservation of Arkansas cemeteries.